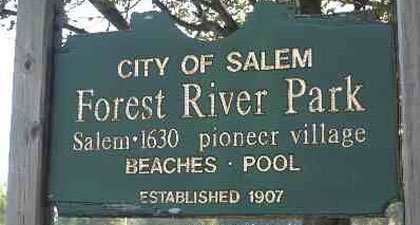 Our staff evaluated the accessibility of some of the key parks in the North Shore in Hamilton, Topsfield, Danvers, Salem, Beverly and Peabody.

This park is named after the famous World War II General George S. Patton, who lived in Hamilton. The park has a historic M4 Sherman Tank at its center that was recently re-painted by a local Eagle Scout in 2018. It’s located on Bay Road and Asbury Street and has a basketball court, swimming pool, tennis courts, a playground, and multiple baseball fields.

Parking at Patton is free. The park’s southside parking lot has sign-less 2 ADA parking spots, but there is no accessible path linking these spots with the remainder of the park. Visitors in wheelchairs or with mobility impairments would most likely be better served by parking in the northside parking lot off Bay Road.  It’s adjacent to the swimming pool and has 2 ADA, van accessible spots.Bradley

The former estate of an early 20th century lawyer and businessman, Bradley Palmer State Park, along the border of Hamilton & Topsfield, has two main parking lots.  Off the parking lot on Ipswich Road, there is a half-mile stone dust wheelchair accessible trail that winds through flat terrain.

The area around the Highland Street parking lot has a Nature Center, picnic areas, and a wading pool. At this location, there are four ADA van parking spaces. Parking is $5 for Massachusetts residents and $10 for non-residents Memorial Day weekend through to October 31st.  The wading pool is accessible by sunbathing chairs.  The Nature Center and the nearby picnic areas are inaccessible, but there is a wheelchair accessible latrine by the Park Headquarters.

The 165-acre Endicott Park has a dog park, visitor center, fishing pond and more! Parking is free on weekdays and $1.00 for Danvers residents and $3.00 for non-residents on weekends. Grills and picnic areas are inaccessible, and the gravel paths around the Carriage House are gravel and could be difficult to navigate, particularly if it rained recently or if one is using a motorized wheelchair.

The Carriage House has a ramp into its nature center, and ADA restrooms with handrails. There is an ADA water fountain as well on the westside of the Carriage House. The ramp to the Haybarn is to steep and long for wheelchair access. Additionally, a stoop surrounds the Townley Family Barnyard except for the fence on the barnyard’s northern corner.

Goodnow Pond has an ADA fishing platform and nearby ADA parking. The fishing platform railings, however, are greater than 34 inches high, potentially making fishing from a wheelchair more difficult. The grills and picnic areas around the pond are inaccessible.

The dog park has a van accessible handicap parking space with gravel/stone dust path to the main entrance.  Inside the main gate, there is stone dust pad to amenities such as benches, bubblers and dog waste receptacles.

Winter Island, A Marine Recreational Park is located at 50 Winter Island Road in Salem, MA.  The park is well known for its RV and camping spaces. Each camping space is on a grassy area and the RV spaces are on the parking lot.  The picnic tables and benches, scattered throughout the park, as well as the gazebo, playground and Fort Pickering are not accessible. The bathrooms are accessible. There is an accessible walkway to the Waikiki beach but not onto the sand. The Function hall is accessible as well as the picnic pavilion, both having two HD parking spots. There is a small office/gift shop that has a ramp for accessibility.

Lynch Park, located on Ober street in Beverly features an accessible Pavilion stage, a recently renovated Carriage House which is a popular site for weddings, receptions, reunions, as well as other occasions. Spread throughout the park are benches and picnic tables, however they are not easily accessible via wheelchair as there are no paths that lead to them. The stalls in the bathrooms located behind the pavilion, are not handicap accessible. There is an accessible drinking fountain located behind the Pavilion stage.

Lynch Park charges an entrance fee of $10 on weekdays and $20 on weekends; this park has five handicap accessible parking spots. To get from the parking lot to the park, there is a partially paved path that leads to the main paved trail, which can be accessed from the handicap accessible spots. There is an outer ring of paths at the Rose garden, but the center and specific terraces within it are inaccessible.

According to Bruce Doig, both Woodbury Beach and Lynch Beach used to have access mats plus manual and electric beach wheelchairs, but large winter storms last year caused the beach to lose a lot of sand so there are a lot of exposed rocks and stones making it unnavigable. They’re working with the Conservation Commission to “re-sand” the beach to make it accessible.

The City added a dog park in 2016 which has two parking spaces that meet ADA regulations as well as a concrete pathway throughout the park. Also available are accessible benches in shaded area and accessible water fountains for pets and their owners.

An entire new pool area is now being designed to include two pools, kiddie pool, splash pad, complete bathhouse and a year- round community space. Currently there is no pool and the bathrooms are not accessible.

The new parking lot has six HP spaces and appropriate curb cuts, and there is a new accessible path and ramp leading to the entrance of the beach and the Salem Pioneer Village. Inside the village does not have an accessible path at the time of this survey.

One of the bleachers by the east side of the baseball field is accessible and has spots for wheelchairs. The playground is accessible by a path from the road that is closed to vehicles.

Salem Residents only on the weekends

Please be scent free.
Photos may be taken at all DRC activities and events.